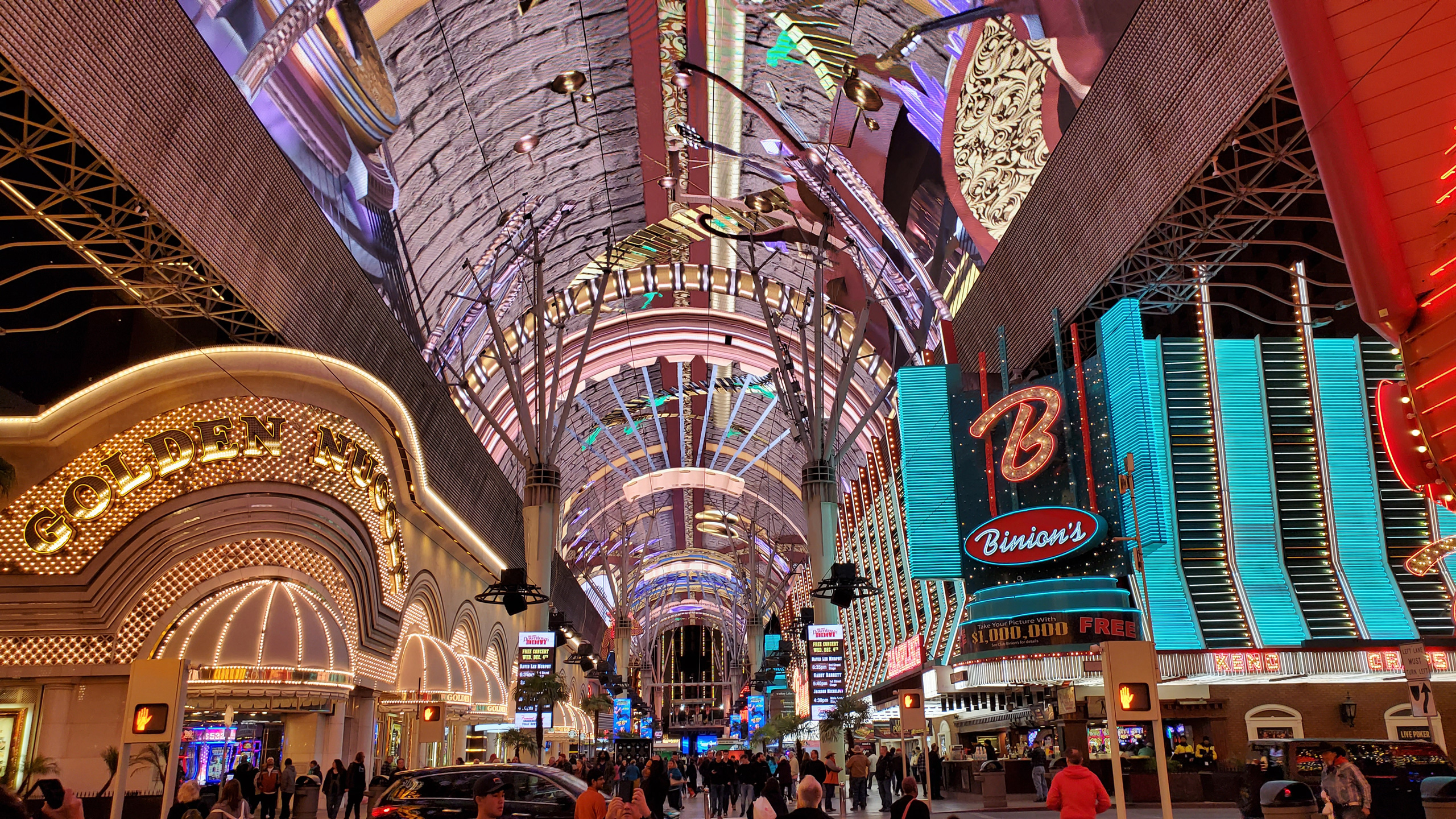 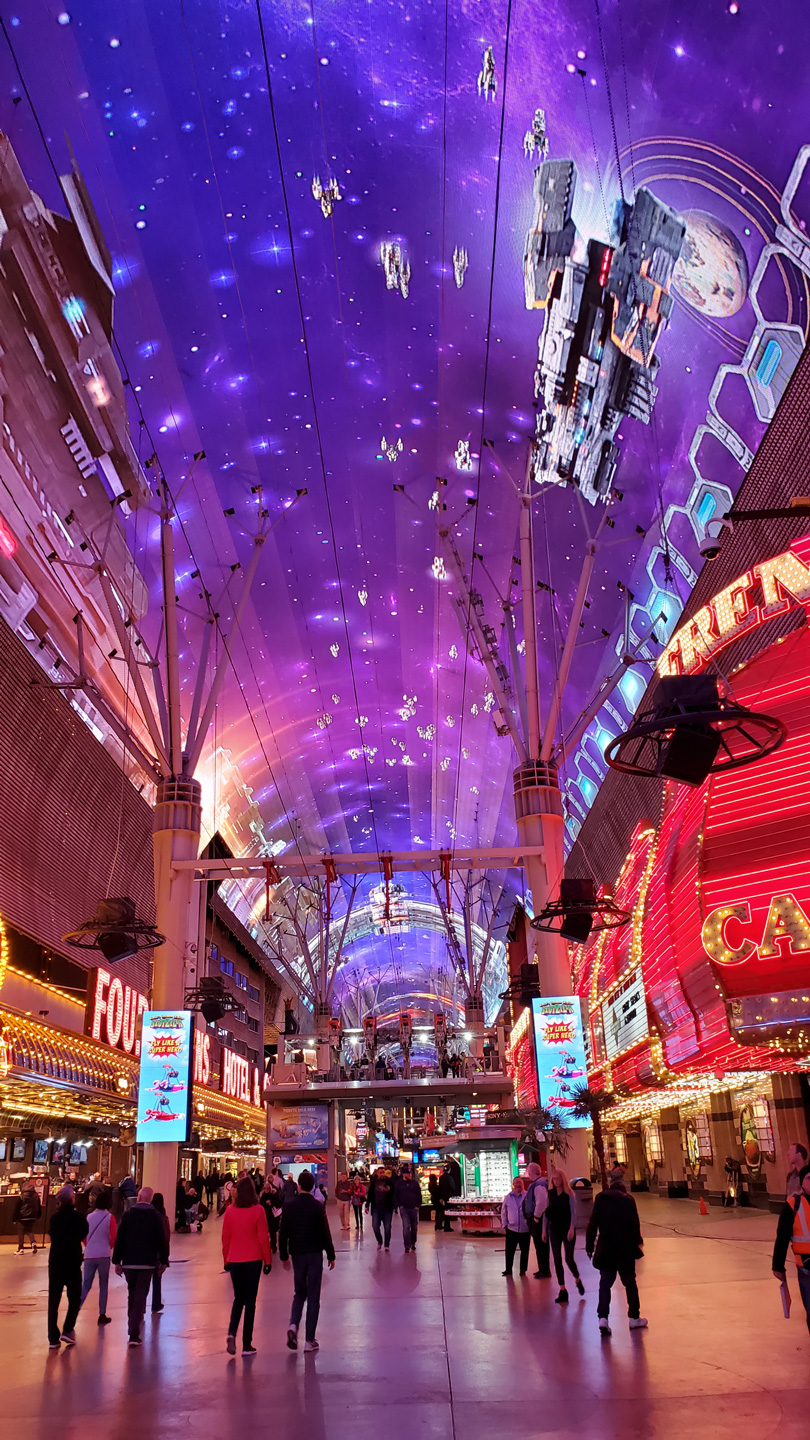 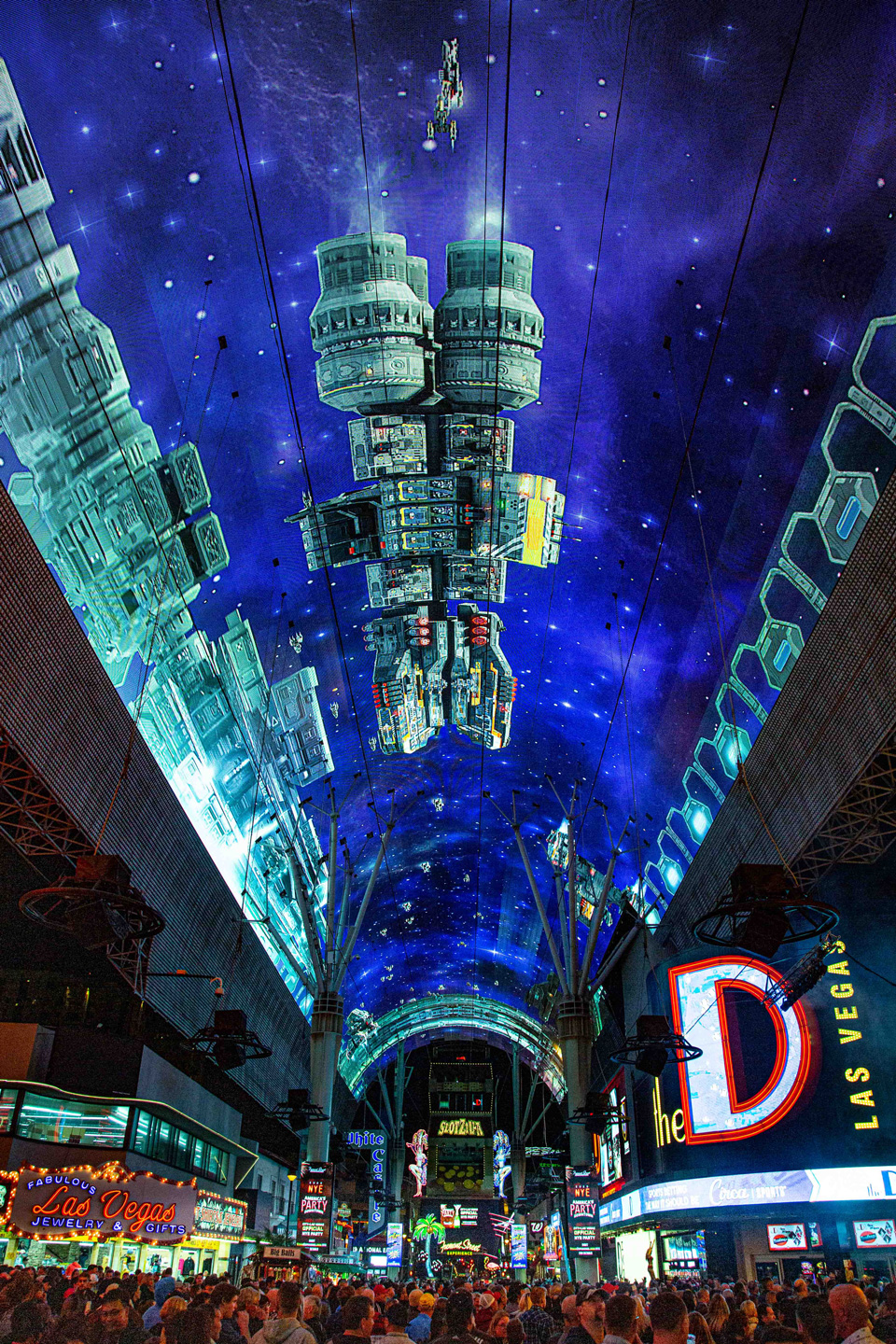 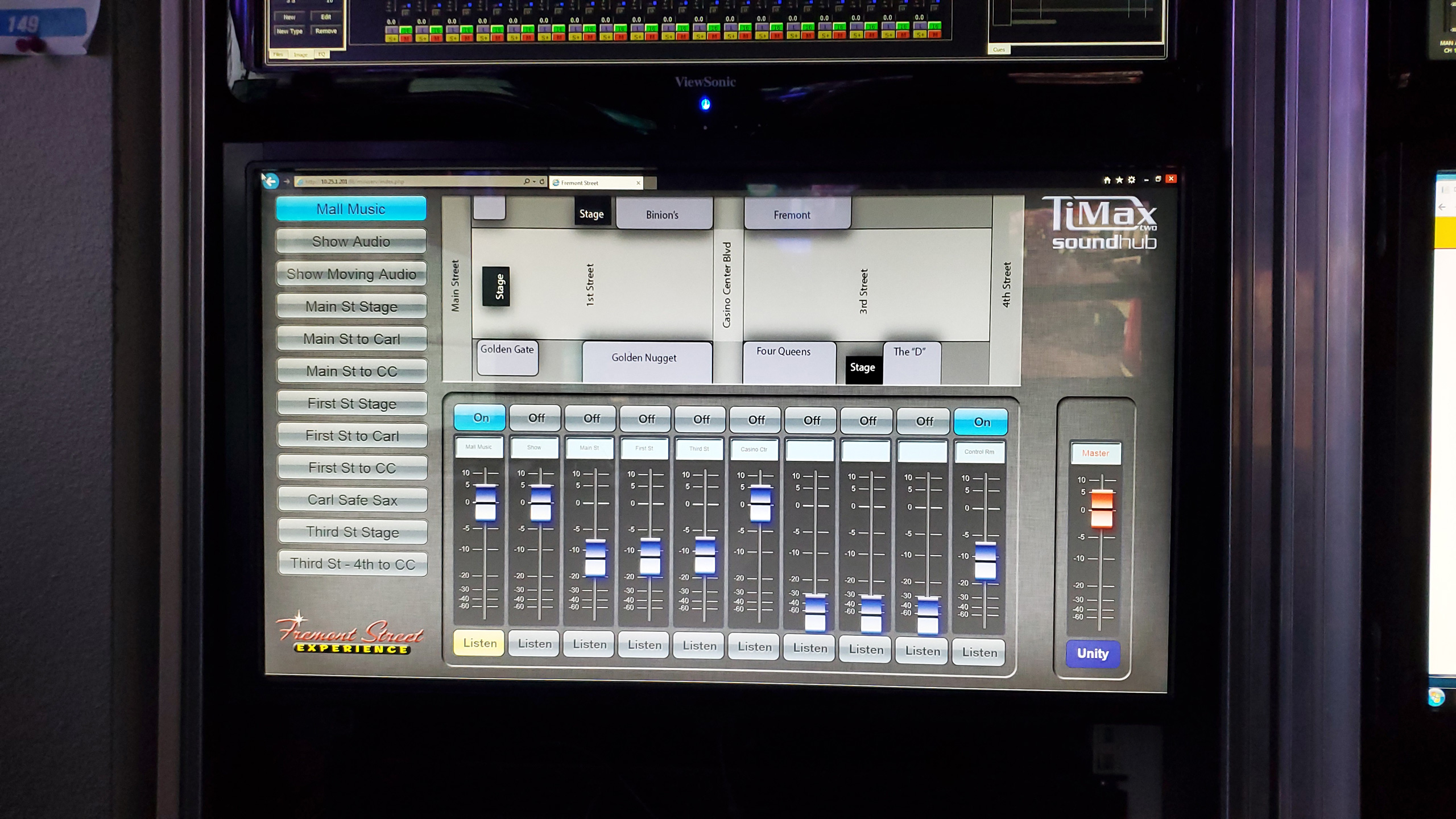 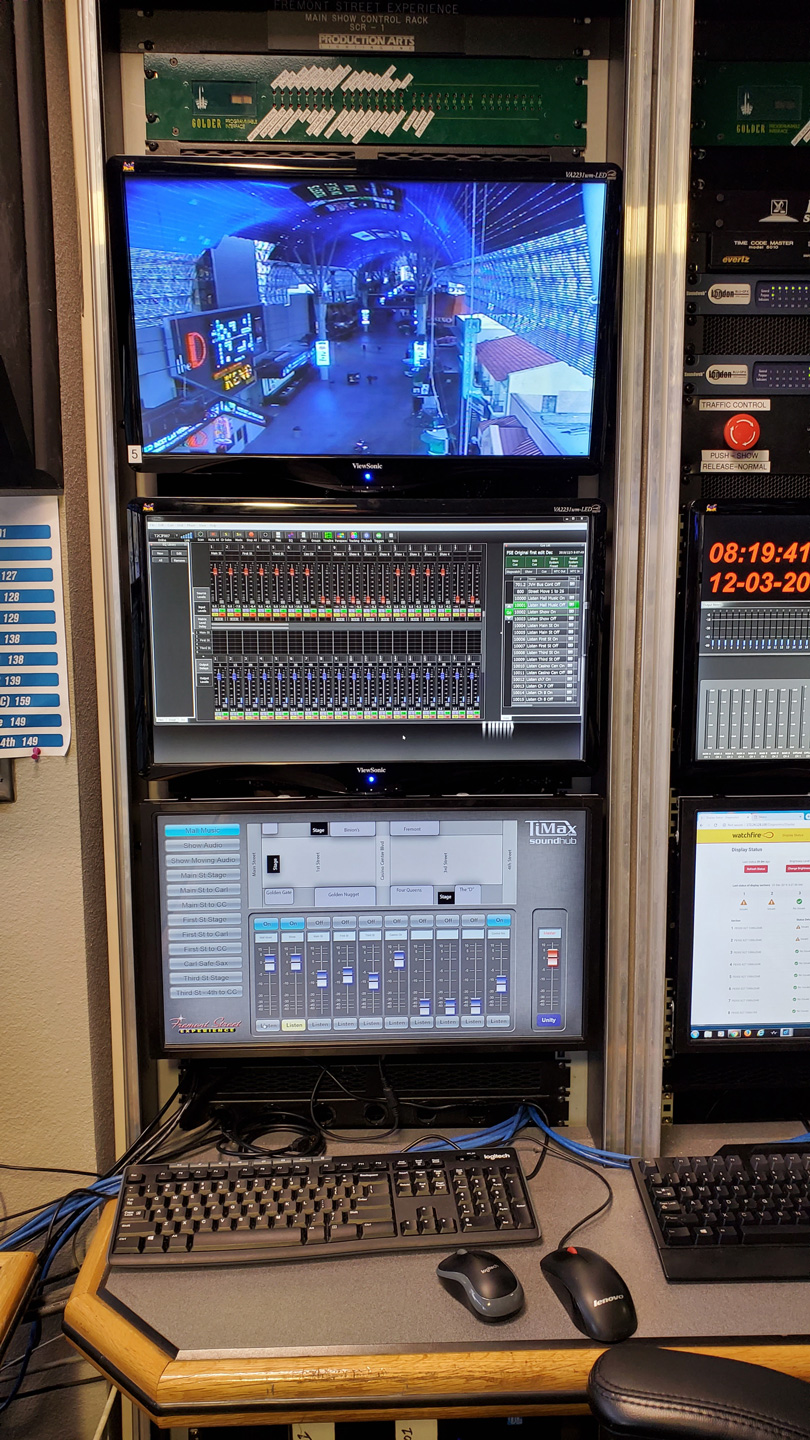 To coincide with major investment in its lavish and world-famous multimedia infrastructure, the vibrant Fremont Street Experience in downtown Las Vegas has upgraded its TiMax SoundHub immersive audio processor to include the all-new HARDCore FPGA audio processing platform.

The upgrade provides extended delay-matrix crosspoint memory of up to one second, plus new ultra-smooth holistic delay-panning algorithms across the street’s vast and unusual 52.4 channel audio system.  With 26 pairs of loudspeakers distributed down the five-city-block space, the powerful new TiMax platform updates extend the necessary resources needed to deliver fully immersive dynamic effects spatialisation for the huge scale of the street’s stunning show content.

Marketing and creative agency, Contend, won the bid to create content for the screen’s brand-VivaVision public launch event. 1602 Group’s, Duncan Crundwell, TiMax partner for the United States, worked with Contend’s audio engineer, Dave Wein, to provide TiMax workflow familiarisation and programming assistance. Between them they rendered the immersive sound fields using the tightly integrated TiMax PanSpace and TimeLine tools, animating them through the length of the street to support the movement of the aerial native HD resolution video content.

Contend’s project manager, Bill Wadsworth, had overall responsibility for the launch and was impressed by TiMax and its simplicity of control. Bill enthused “…It’s awesome of TiMax to simplify something that was borne from an engineering and live tool perspective and make it into a friendly interface for those of us that come from the post-production side of things”

The accuracy and responsiveness of TiMax was an important draw to the team at Contend and Wadsworth added that, if you ‘give TiMax accurate inputs about where everything is, what the components are, how things move in a space like that, you can do – and this is so important – just about anything.”
Looking back on the project, Wadsworth stated, “With TiMax, we had a tool that you could just blow people’s minds with – being able to control sound in that way, and I dare anyone else to try to do that – nothing else on the market has that control or anywhere near what that box does”