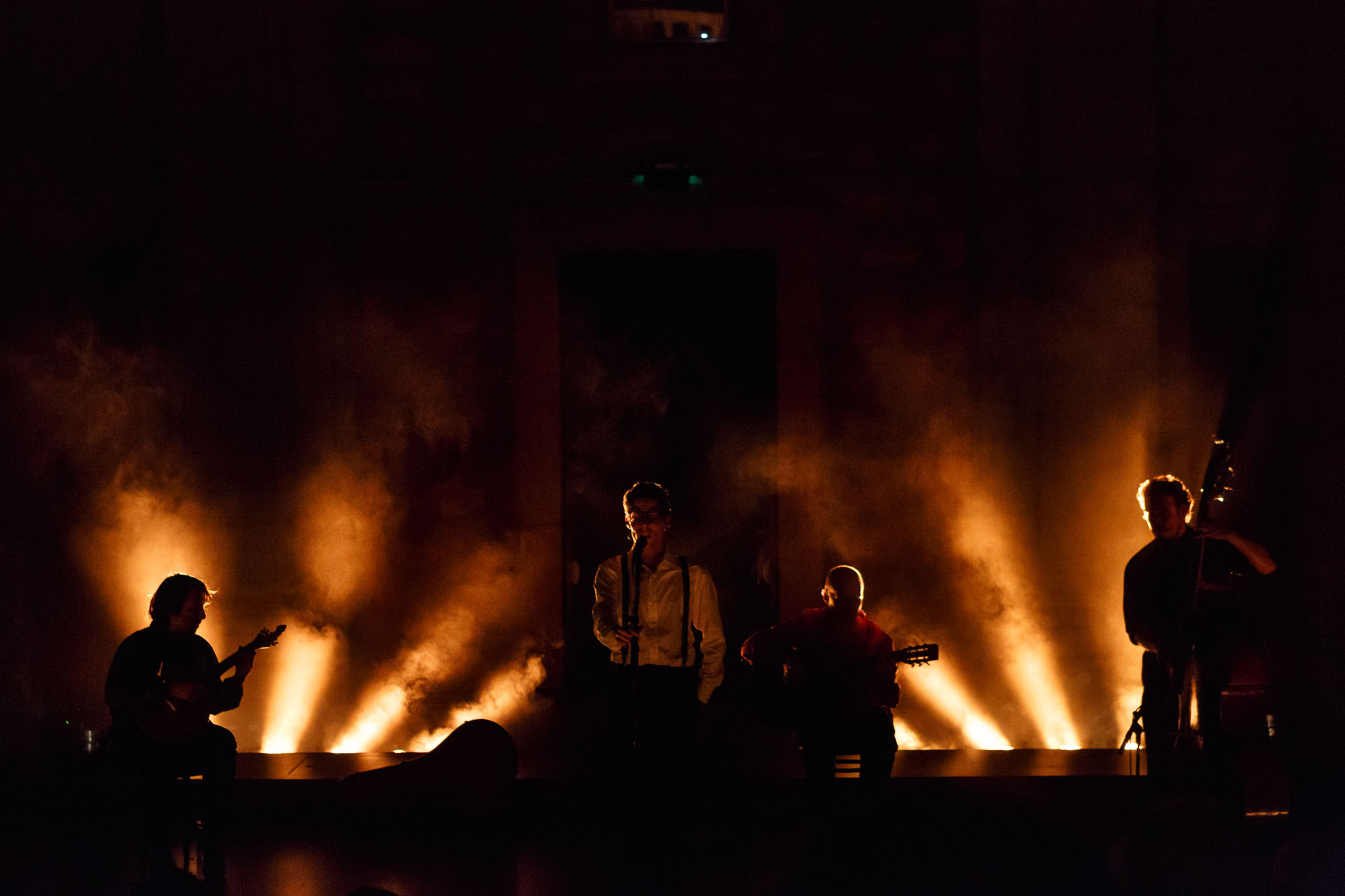 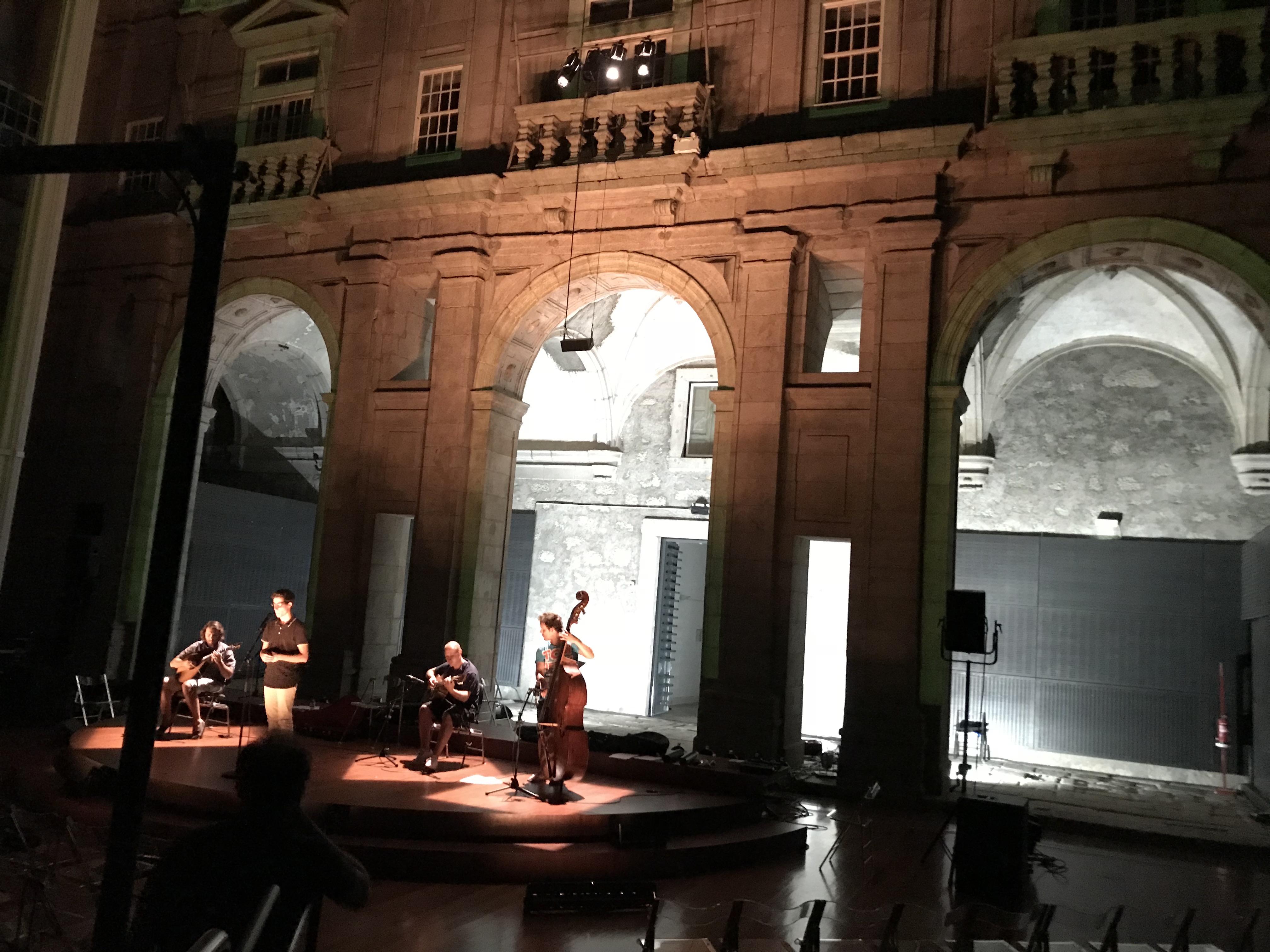 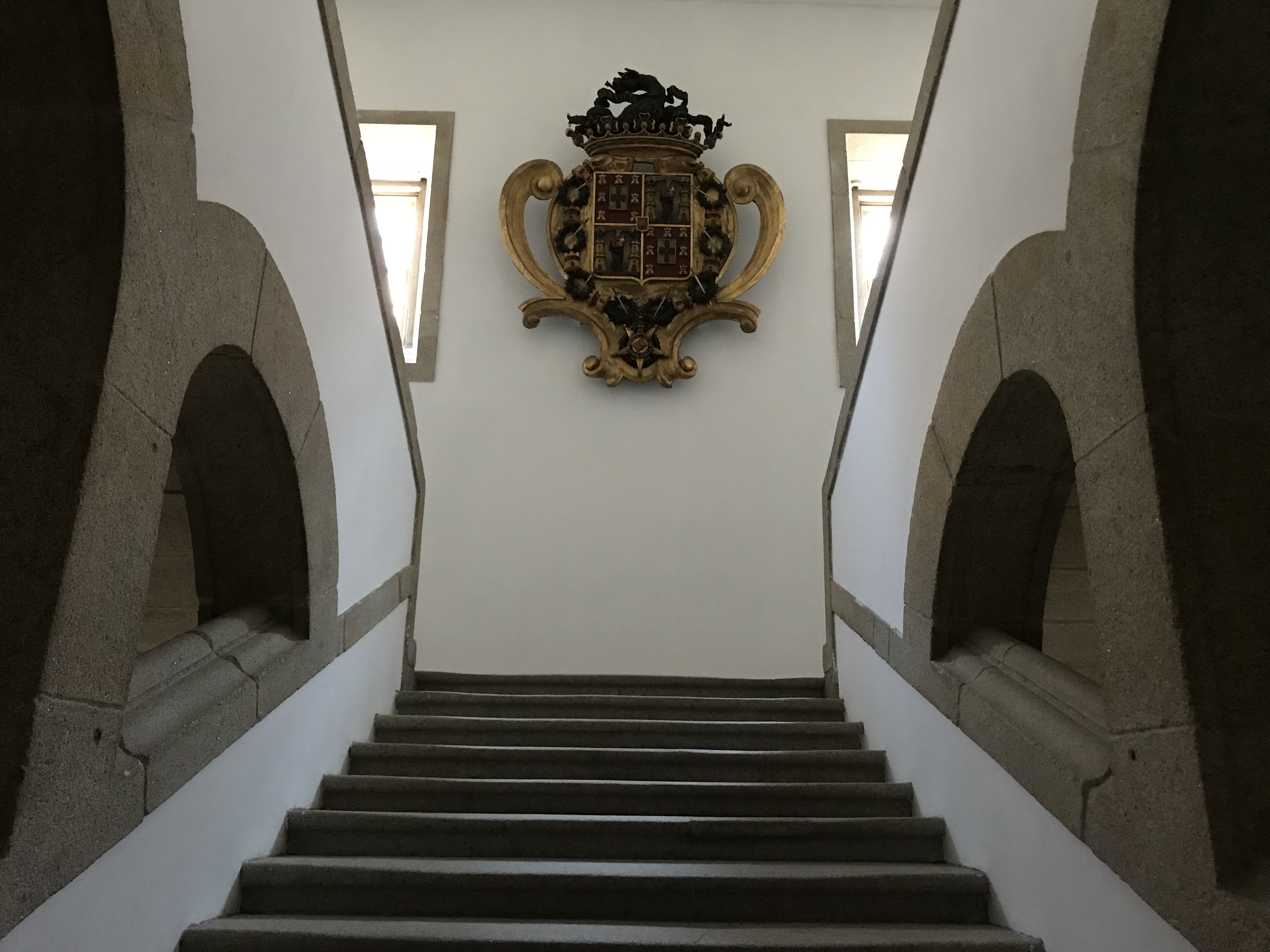 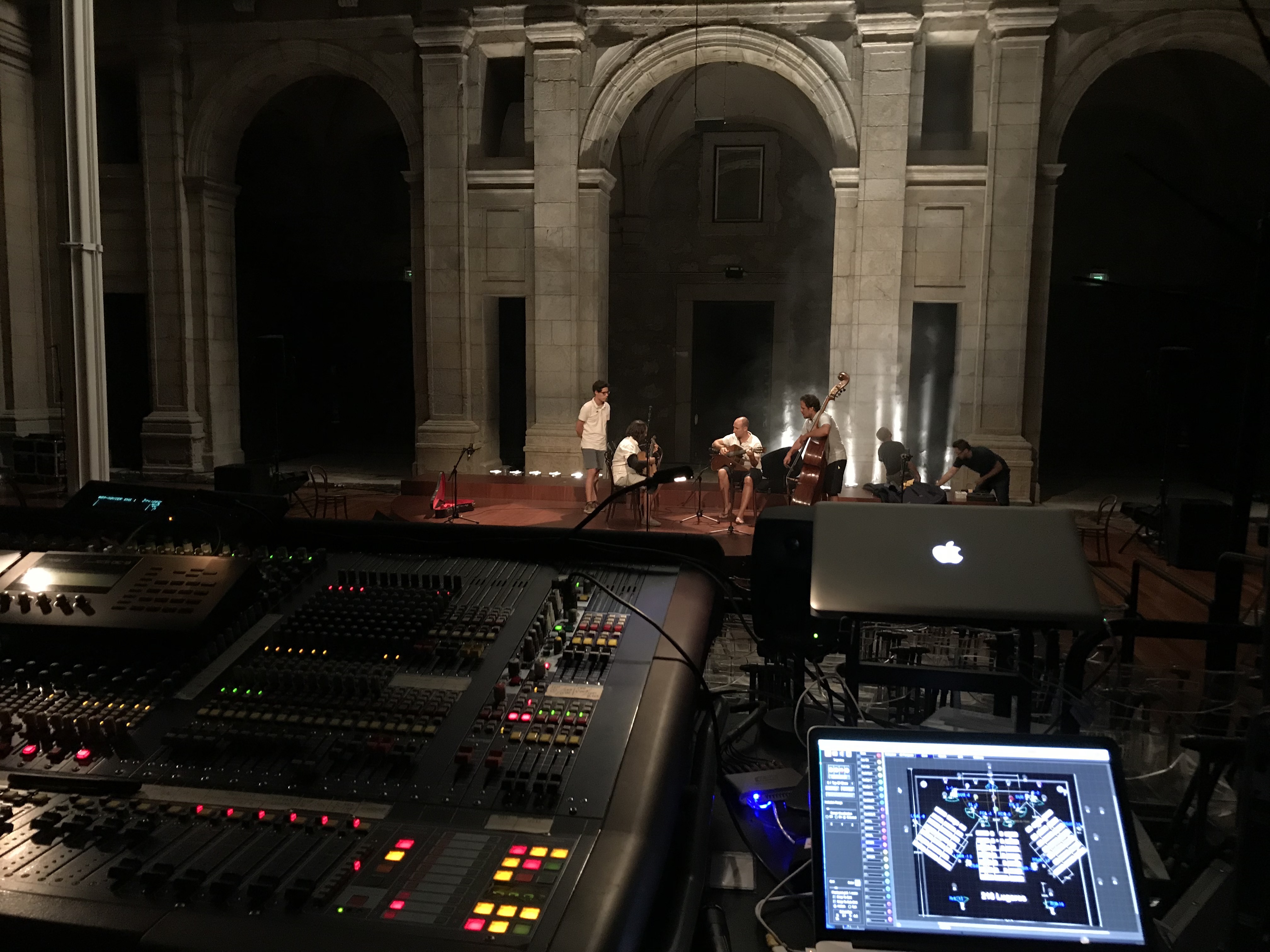 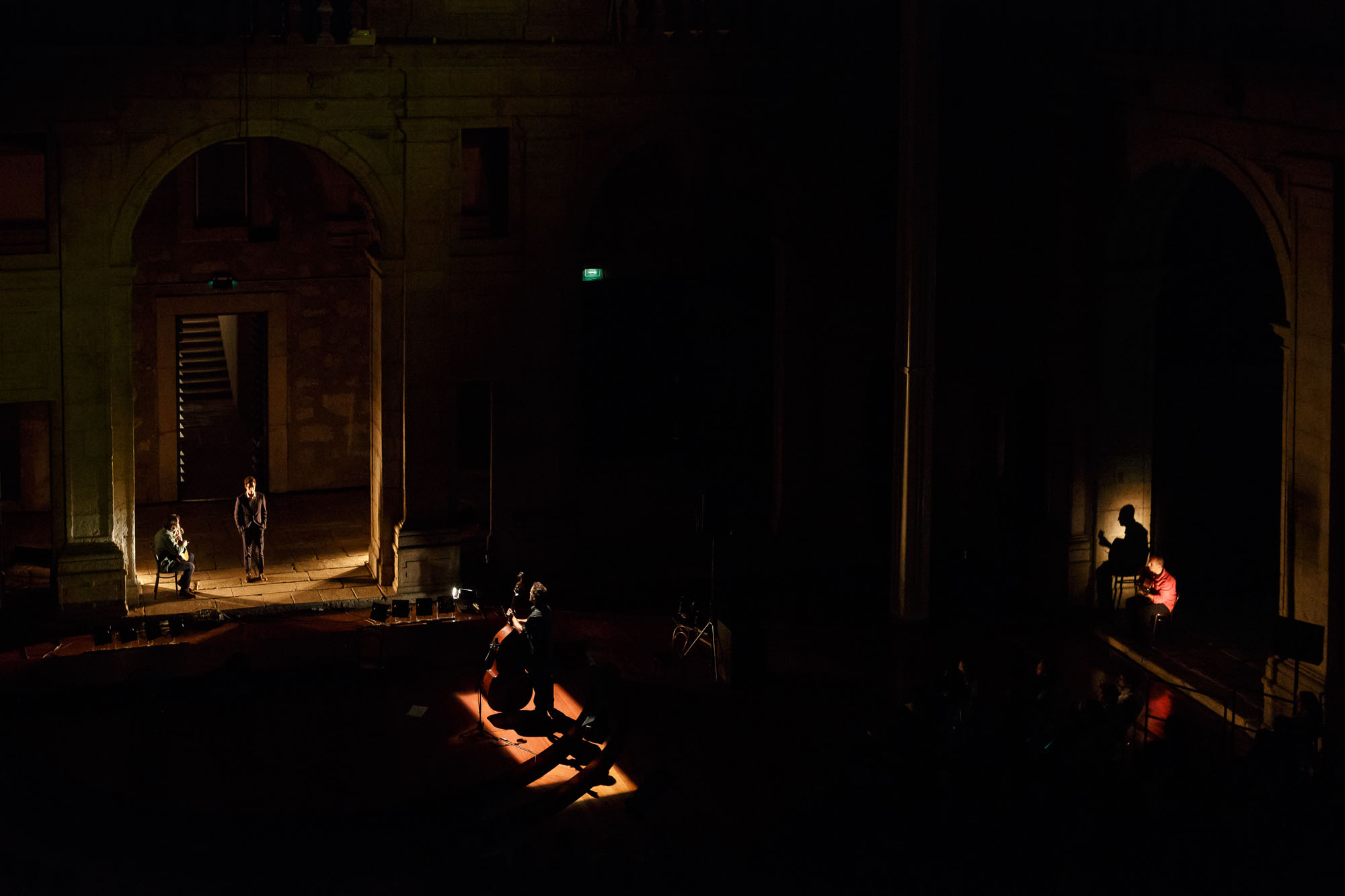 Leal explains, “Having followed the developments of the TiMax system for some time and wishing for the system when I met some challenging shows requiring different sound perspectives simultaneously, I finally found the opportunity this year to apply the system in a real context, in a Fado concert where movement throughout the performance is tradition.”

The concert played in the covered, wooden-floored courtyard of the Monastery to a three section, fan shaped audience position, during an International Music Week event that also doubled as album launch for the band.

The multichannel speaker system for the event, designed by Francisco Leal in discussion with Out Board’s Dave Haydon, who visited the venue to help fast-track the TiMax set up and programming, featured a rented TiMax SoundHub-S16  processor feeding all speakers separately via analogue outputs, and receiving mic and effects signals via analogue inputs fed from a Midas H2000 console.

The tradition of Fado is that the musicians change positions during songs, so TiMax Cues were implemented to create localisations for each movement, as well as to produce an overall immersive spatial environment for the band’s standard stage format with the singer up front.

The other positionings for the four-piece band saw the two guitarists – standard acoustic and a large mandolin-style Portuguese guitar – move to sit in the chairs by the left and right PA stacks; or the Portuguese guitar player seated behind the band with the acoustic guitar sat far right, under an arch away from the rest of the band.

For one song the young singer walked from a first-floor rear right balcony to a front-right balcony, with TiMax panning him automatically with a matching spatial reverb. Other TiMax cues received sound effects from QLab, such as dockside soundscapes, whirling seagulls, a cityscape with a tram, and fireworks, all of which were spatially distributed or immersively panned around the room using MIDI triggers.

Having waited so long to exercise TiMax in a real scenario, Leal was overjoyed with the sonic experience TiMax created, “The result was astonishing, creating a solid, three-dimensional sense of instruments in the locations - the etymology of where the word stereophony derives! TiMax added massively to the scenes, the soundscapes and the effects, bringing these sounds to credible new life in the space.

“The possibilities the system allows are part of a dream of mine. Not only on live shows but for sound installations in exhibitions as well. A big thank you goes to Out Board, and to Dave Haydon, for your endless help and availability, joining me in this experience.”