TiMax Midsummer Nights in the Wolkenturm “Pillar of Clouds” 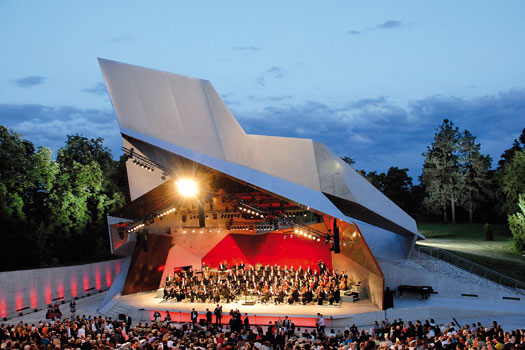 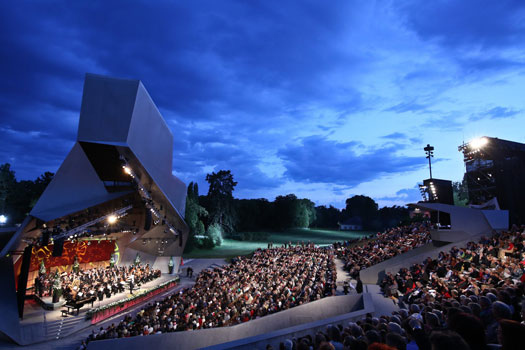 With a requirement for subtle audio reinforcement to complement the spectacular venue’s natural acoustic, Wolkenturm’s Head of Sound Andreas Dröscher turned to TiMax for the panoramic realism created by its source-oriented reinforcement (SOR) spatial amplification techniques.

The architecturally futuristic Wolkenturm´s open-air stage is akin to an almost startlingly modern giant sculpture, nestled in the beautiful landscaped park of Austria´s 700-year old Grafenegg Castle. The ultra-modern stage, designed by architects ‘the next ENTERprise’, blends perfectly with the romance of its surroundings and, built in a natural hollow, reaches some 15-metres to the height of the treetops. The terraced seating for an audience of 1700 and adjacent lawn areas for a further 300 already enjoy a natural, acoustically enhanced sound from the open-air arena’s stylised acoustic shell, but for full occupancy some suitably subtle sound-reinforcement is a must.

The award-winning stage hosts yearly some of the world’s most prestigious orchestras during an annual festival season of music and operatic concerts. The beauty of the setting combined with the quality of the performances ensures unforgettable shows – which in 2016 have been further enhanced with the purchase of a TiMax2 SoundHub-R16 processor for delay-matrix spatialisation.

Dröscher was introduced to TiMax during a seminar workshop by Out Board’s Dave Haydon at a working open-house summer barbecue hosted by Austrian Distributor ATEC Pro Audio. A trial at the Wolkenturm Arena, with live orchestra on stage and TiMax programmed by Out Board’s Robin Whittaker, demonstrated to him convincingly that TiMax could deliver transparent, fully spatialised SOR for the regular Tonkünstler Orchestra Niederosterreich and other premier ensembles that grace the dramatic stage throughout the summer festival season.

Five ambient mic sources plus up to 14 spot mics were fed direct from the Digico console to the TiMax SoundHub via its MADI64 interface. TiMax in turn sent individual delay-matrixed loudspeaker feeds back via the console to the d&b sound system comprising an LCR configuration of Y-Series line-arrays plus six E8 front fills. Via this setup, the orchestra’s localisation was distributed across a ten individual zones – five downstage and five midstage – to provide sensitively spatialised amplification which matched the orchestra’s natural acoustic panorama.

Dröscher was suitably impressed with the results TiMax achieved for the highly atmospheric Midsummer Nights Gala opening event, (complete with Elgar and fireworks), such that the Wolkenturm venue purchased it immediately from ATEC Pro Audio for the rest of the summer season and future engagement.