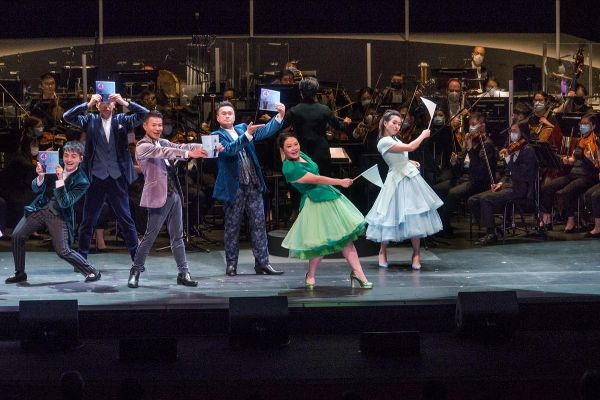 Provided by Hong Kong’s L-Supply, TiMax TrackerD4 precision stagetracking enabled the principle eight performers, all eminent stars of Hong Kong musical theatre, to move freely across and around the stage without working strictly to pre-assigned cue-points. Discreet TTd4 Tags worn by the performers are small enough to be secured into virtually any costume location with no interference. Meanwhile, the accuracy of TiMax TrackerD4 not only gives peace of mind to performance directors, but substantially reduces rehearsal times, providing not just a highly effective sound design enhancement but also the significant benefit of big savings in production costs.

L-Supply’s Omega Lam, explained, “The TTd4 Sensors were so easy to install that, with the theatre’s audio team, we were able to move sensors a couple of times to achieve the best tracking performance. When all eight actors sang together, the audio team was very impressed with the headroom we created and the clarity of each individual voice as they move around the stage.”

Sound designer Candog Ha Yan-pui specified TiMax TrackerD4 to control separation of vocal mic inputs being fed into a d&b Soundscape processor and multichannel speaker system. Candog explained that she wanted to achieve the ‘natural and realistic voice of the actor’, choosing the TiMax TrackerD4 automation for its fluidity and precision over the potentially arduous task of lengthy cue blocking.

The Originals is a collage of excerpts from Hong Kong’s most popular musical shows created between the years 1970 and 2000. The production, which has enjoyed a sell-out run of performances, was curated by award-winning local composer, Leon Ko, who also took the role of music director.  The music was performed by the Hong Kong Sinfonietta, positioned directly behind the stage and performers.